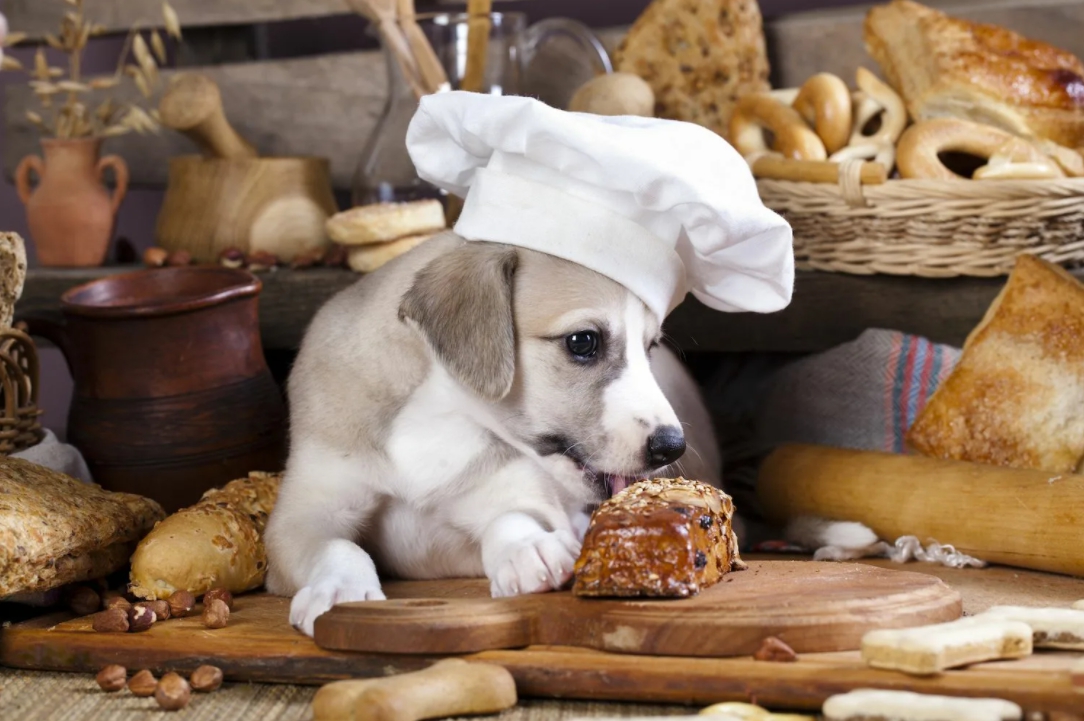 Bread is a pretty tempting snack. This is why the pet often reaches for a piece of bread left on the plate, or is fed by the owner himself. However, is it possible for dogs to have bread without any health consequences, because bread contains a large amount of carbohydrates.

Dogs are known for their fondness for hauling what their owners eat off the table. However, unlike people, they do not know what is good for them and what can harm. When they are hungry, they look for food all over the place, and it may happen that they eat something that should not be included in their daily diet. Can dogs eat sweets?

Owners’ reactions to their pets eating bread can be extreme. Since their owners, in principle, do not know and are not interested in whether it is possible to feed the dog with bread. Some people do not pay attention to what the dog eats between meals, while others rush to the vet for fear of bread poisoning. As is often the case, both reactions are exaggerated – in this case, common sense should be guided.

Firstly, the bread does not contain toxic substances that can in any way poison the pet’s body. However, it must be remembered that there is salt in the bread, which the dog cannot take outside, because he does not sweat. Salt accumulates in the body and, over time, exhibits its toxic effect. Bread with raisins or garlic is also harmful to the pet. However, if the dog has not eaten too much bread, it is not necessary to go to the vet right away.

The exceptions are cases when the animal is allergic to cereals contained in bread or rolls. In such a situation, this type of food can really pose a threat to the health of the pet, so you should immediately contact your veterinarian. However, the owner should clearly understand that even if the pet is not allergic to bread and other bread products, this does not mean that the dog should be given bread daily. It is better to refrain from feeding with bread, not to acquaint the dog with bread products at all.

Is it difficult for a dog to digest bread

If the animal does not have allergies, you do not need to panic, but you should not feed the dog by constantly adding flour to its menu. Can dogs eat bread – no, bread is probably not the best food, and it definitely should not be included in your pet’s daily diet. However, if he accidentally grabs a few pieces of bread from the table, nothing bad will happen.

According to some sources, the dog does not digest bread well, which is heavy food for it and can remain in the stomach for a long time, which makes it difficult to digest other foods. This is partly true – because bread is high in carbohydrates, it is difficult to digest, but a healthy dog ​​has no digestive problems. However, when the owner gives the animal bread at every meal, it can lead to obesity and serious health complications.

Is it okay to give a dog black bread

Rye bread, unlike white bread, is easier to digest, it contains more useful microelements and vitamins, for example, phosphorus, magnesium, calcium and B vitamins. Therefore, if the pet cannot live without this product at all, then you can feed the dog with bread made from coarse rye flour grinding. Naturally bread, even rye bread, is only a tasty addition to the pet’s main food. The animal’s diet should consist mainly of meat, offal or fish with the addition of cereals, vegetables, fruits and dairy products.

During training, the dog needs to be encouraged with some kind of treat. You can buy a treat for dogs at a pet store, or you can prepare it yourself. For dogs who look at you hungrily when you eat bread, rye rusks or rye crispbreads are suitable. Crackers are very easy to prepare. It is necessary to cut rye bread into small pieces and send to dry in the oven. Treat your pet with ready-made breadcrumbs while learning new commands, just do not abuse the product in order to avoid obesity and gastrointestinal problems. How to teach a dog to sit command.

Can dogs sometimes be given white bread?

The most “dangerous” bread for a pet’s health is the same kind of bread that is not recommended for everyday human consumption. White bread, toast and all kinds of buns and croissants are discouraged by nutritionists, which applies to food for both humans and dogs.

White bread contains more calories and fewer vitamins and minerals. In addition, bread bought in stores or bakeries usually contains a large amount of preservatives, which, like humans, are also not recommended for a healthy dog. As for nutrition, the same principles apply in the diet of animals and humans: artificial additives and high-calorie foods should be excluded from the menu.

It’s very simple, before deciding whether to give pancakes to your four-legged friend, you need to find out from what ingredients they are prepared. Pancakes are usually made with wheat flour, milk, eggs, sugar and salt. Can dogs eat milk? Many dogs, especially those with stomach problems, have diarrhea after milk. Can dogs eat eggs? For dogs, eggs are added to the diet, but not often and if there is no allergy to them. It is contraindicated to add salt and sugar to pets. Can dogs eat wheat grits and wheat flour? Wheat porridge is poorly digested in dogs; decorative small dogs should not be given it at all. That’s the answer, the traditional pancakes that we are used to seeing on the table should not be given to your pet. Even as a delicacy, it is better to choose something else. Can a dog eat cheese?

Oddly enough, it is allowed to give the puppy bread in small quantities. Puppies grow up, love to run and play, so they spend a lot of energy and, therefore, need carbohydrates. You can’t give a puppy white bread, but rye bread is fine. If you plan to feed an adult dog with bread, then from 4 months of age you can treat the puppy with a piece of rye bread, only it must first be soaked in meat broth, kefir or yogurt. Then be sure to look at the behavior and condition of the puppy, as an allergic reaction, diarrhea, and constipation may occur. If symptoms appear, it is worth abandoning this product.

The best alternative is homemade bread

However, some types of bread will have a positive effect on the health of the animal. As you know, real bread is made on the basis of grains and seeds, which are rich in fiber, which makes digestion easier. By themselves, cereals are not dangerous to the dog, if he is not allergic and does not feed him too much.

Therefore, if your pet loves such snacks, you can give him healthier and less harmful bread without adding salt. Homemade bread is the best solution for dogs who can’t help but snack on bread.

Can dogs be fed homemade bread? It does not contain preservatives, and, in addition, the owner decides for himself what should be in it and in what proportions. You can add unusual ingredients to the dough, such as banana or carrots, which are high in vitamins and which your dog loves to eat too. Homemade bread is much healthier than purchased bread, but care must be taken when baking it properly in the oven.

Raw dough can pose a much more serious threat to your dog than regular baked bread. You should also be careful with freshly baked hot bread, which is strictly not recommended for your pet.

Can I give my dog ​​bread and butter?

What about filled bread? Can the dog eat bread and butter or could it seriously harm him? Fortunately, oil is also not a toxic product. However, you need to be careful with the amount, because, like in humans, consuming large amounts of oil can cause stomach complications.

Bread, in any form, should not be the main ingredient in a dog’s diet. Small amounts eaten from time to time will not harm the dog, unless, of course, he is allergic to grain, but it will never replace healthy food intended for a particular breed or age of the dog. If your pet loves snacks and is clearly bored with their daily food, it may be worth considering making a special treat that is healthier and probably tastier on the palate.

Homemade cakes are, of course, better than those bought in stores. It all depends on the ingredients used. Homemade dog biscuits with peanut butter, carrots, or liver are definitely a much better option than buying bread. When cooking, sugar and salt do not need to be used. Keep in mind, however, that homemade baked goods are a treat that can be provided as a reward for good behavior. 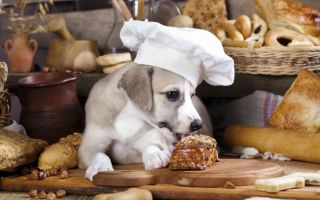